skip to main | skip to sidebar

First the finished inks of the next few Boobie Girl, Natasha..

I'm really getting into my inking now, making a concerted effort to get the inks as good as possible, rather than relying on the computer to touch them up. These Boobie Girls are good practise, as they're extremely entertaining to draw.. btw Natasha was previously called Cheryl in one of the last few sketch posts. But after drawing her up properly, she ended up bearing a more than a little resemblance to BBC newsreader Natasha Kaplinsky.. hence the change of name :-)

Incidentally, I'm colouring up Natasha now and I'll be adding a tutorial on the colouring process to the website soon. My current tutorial is far too outdated..

Next up some finished pencils of the next few Boobie Girls, Frankie & Jaimee..

And to finish off this post, some more sketches.. 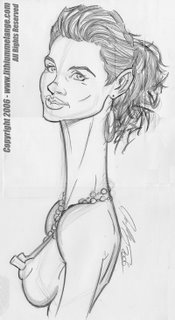 Yeah that is a slightly sketetal Paris Hilton above!

See ya soon.. with finished coloured artwork!!
Posted by Jon Moss at 3:03 PM